As this is a generally temperate country [that’s climate-wise of course, we’re not talking emotionally – not any more, anyway] the Brits do like to get into a flap whenever there’s a possibility of the weather behaving a degree or two outside of the norm – the Daily Express couldn’t survive otherwise. And, as a broken clock will always tell the correct time twice a day, a quack forecaster will at some point call it right when the weather behaves badly. And lo, it’s early 2009 and London finally experiences a proper snowfall – yes, even bigger than in 2003 (though not quite 1963). By ‘proper’ of course, we don’t mean anything like this, but by UK standards, this is veering on Armageddon. And, initially at least, everybody loved it.

The big fall came to town on the Sunday night, and on the Monday half the city came to a standstill and the other half went out to play. No doubt engaging in lots of this. This intrepid chronicler somehow found a multitude of important chores that needed to be attended to in the warm and dry protection of his home, knowing there’d still be a bounty of photographic opportunities out there on the Tuesday. 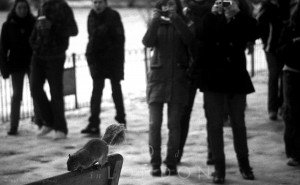 Well, apparently not. For, having spent a day or so making merry, London’s population evidently decided that was enough, and retreated to its Horlicks, leaving the great white vistas of Westminster’s parklands eerily quiet (apart form the usual crowds of tourists indulging in their perplexing fascination with our [migrant] squirrels, that is).