Another one of London’s small but enduring ceremonies – and for this we can thank a certain Mr John Norton: Alderman and former Master of the Honorable Company of Stationers, who died in 1620 leaving money in his will for an Ash Wednesday sermon, some cash & bread for a dozen poor people with – and this is really why we’re here – the residue going towards Cakes, Wine and Ale to be shared by members of the Company attending the sermon. 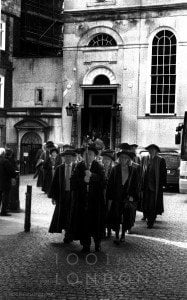 Stationers Hall, conveniently enough, is just around the corner from St Paul’s Cathedral, although the sermon is held ‘underneath’ the cathedral in a chapel representing the small church that used to be here before being consumed by the Great Fire in 1666. 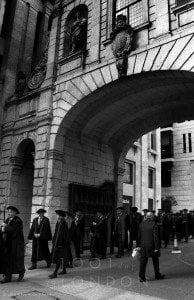 The participants don their robes, tuck into their lunchtime ‘feast’ and then proceed solemnly past the modern sculpture by Thomas Heatherwick (these days not quite the golden boy of design he was deemed post London 2012) through the historic Temple Bar – which has actually only been on this spot since the recent redevelopment of Paternoster Square – to the side door of the cathedral that houses St Faith’s Chapel for their service (and no napping there at the back…).

Interestingly (& I’m not suggesting the good Mr Norton and friends would have been aware of this), cakes and ale also have something of a long association with witchcraft. There’s also a rather feisty folk band operating under that moniker, wouldn’t you know…