Cable Street is a long and pretty damn straight road that began life as a place where huge ropes could be laid out and twisted into cables as a part of the local ship building industry. 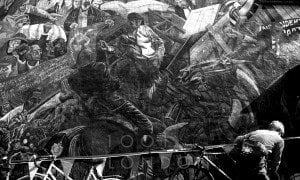 Until October 1936 the most interesting story related to this 600ft long road (apart from the making of 600ft long cables, obviously) was the apparent suicide and subsequent gruesome dispatch of the notorious Ratcliffe Highway murderer/suspect John Williams, whose skull ended up as a popular tourist attraction at the Crown and Dolphin [not that far from the latest & somewhat less popular tourist destination concerning another infamous ne’er-do-well]. 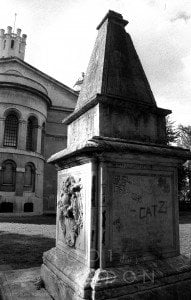 However, the confrontational opportunism of the almost-but-not-quite-so notorious Oswald Mosley and his thuggish supporters in attempting to parade along this street of (mostly Jewish) immigrants has made it a landmark of 20th century political history.

The subsequent battle is commemorated with one of London’s most celebrated murals, the small park and churchyard (Hawksmoor’s St George in the East, no less) behind which is the venue for today’s event marking of the 70th anniversary of the confrontation, with parade, speeches, music and dance and a film and photography presentation. 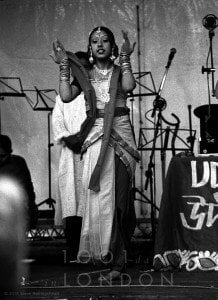 Like many neighbourhoods in this area of London, Cable Street has reflected the city’s various migrant influxes over the past century or so from the Irish to the Jewish to the Afro-Caribbean to the Bangladeshis – all of which were involved in the community celebrations during the afternoon. 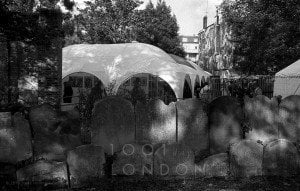