Even though the street that this scene was photographed in has changed enormously in the Rather A Long Time since it was taken, this particular area is still possibly the least gentrified of any district within walking distance of the City [I know: we’re getting there, don’t worry…]. 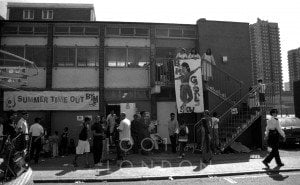 As with it’s more celebrated neighbour, Spitalfields, the area has been a magnet for migrants over the centuries – hence Mosley’s interest in the 1930s – and currently has a strong Bengali community, a significant section of which help to organise and take part in this annual multicultural community festival.

(Yes, the street was a little quiet when the Very Tall couple went for a stroll down it). 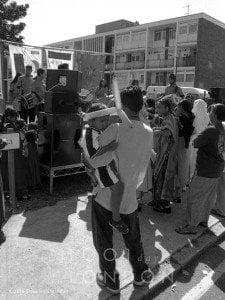 As it happened, Watney Market down the road (not quite the place it used to be either, although it does have an Idea Store now) was also having a bit of a community bash, and if you explore the neighbourhood a little further, you’re also not far from the wonderful Wilton’s Music Hall, the historic church of St George in the East and the (now) tranquil Shadwell Basin.

This chap obviously has a very sophisticated sense of humour; and here’s The Men They Couldn’t Hang telling us more about that little skirmish in Cable Street in 1936.