The Hindu festival celebrating the defeat of the buffalo demon Mahishasura by the goddess Durga is one of London’s Bengali community’s most important events of the year, but Londoners very rarely get to see a Durga Puja ceremony in all its glory. Despite there being a number of celebrations throughout the capital each year, it’s mostly held indoors, as opposed to the grand festivities in parts of South Asia. 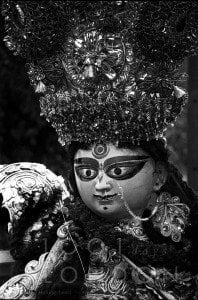 In 2006, however, as a part of the British Museum’s Voices of Bengal season, craftsmen and raw materials were brought in from Bengal in order to create a clay image of the goddess. Constructed during the summer in the Great Court of the museum, the image was then taken to the Camden Centre for the 5-day festival before being transported to the riverside at Putney for ritual immersion (with water from the Ganges) in the Thames, a river that is itself no stranger to spiritual activities over the years. Meanwhile, in Kolkata, a slightly grander version has been created.

There’s a full documentary of the project here (spot the bald chap with a camera on the foreshore). And there’s something to get your toes tapping here.