It seems to be a given that Carnaby Street isn’t a patch on what it used to be in the Sixties, which – for those of us far too young to remember – is probably true, judging by some of the footage available (especially considering most of the rest of London was still in black & white).

Still, the current incarnation is doing its best to bring back some of the glamour, though you suspect whatever they do, it’ll never satisfy some people. 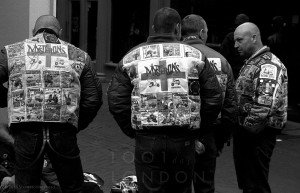 Anyway, they’ve been good enough to allow the whole street to be taken over by a bunch of snappily dressed folk on scooters this Easter Monday (and no doubt some of them bought something flamboyant here in the good old days), as a starting point for a charity run to Stanmore Hospital before heading up to the legendary Ace Café for an evening of Mod culture. The main instigators of the gathering are the boys (and girls) from the Mysterons Scooter Club, for whom this is their 4th outing (very similar to the 3rd and 5th ones in fact).

Named after the dastardly aliens from Gerry Anderson’s (really quite disappointing) follow up to Thunderbirds, Captain Scarlet, the club celebrated its 20th birthday in 2015, and know a thing or two about patches, it seems. 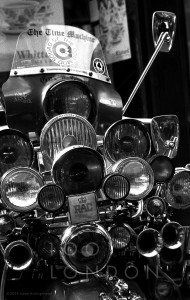 And while we’re on the subject, this band from Holland also seem quite taken with the whole Gerry Anderson schtick.