Ah – the noble sport of cricket: possibly not quite as gentlemanly as of yore, but still one of the most civilised ways to conduct a competitive sporting encounter between two nations (especially when the two countries in question have so much in common). Well, the 5-day version of it is, anyway.

So 127 years after Australia became responsible for the creation of one of the smallest sporting trophies in the world by beating England in only the second test match in England, the two teams were once more at the Oval for the deciding match in another enthralling series (though not quite as enthralling as the 2005 one. And we’ll gloss over the whitewash in Australia two years later). 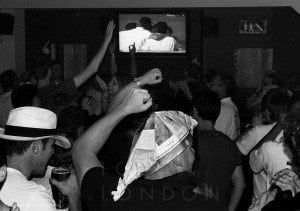 In reality, there was very little chance of England contriving to lose this one with Australia needing 546 for a highly improbable win (though you never know with this bunch…), the Aussies falling short by almost 200 runs with a day to spare.

It was quite surreal in the Beehive pub near the ground, where the roar of the crowd celebrating each wicket could be heard about ten seconds before they’d be witnessed on the TV screens in the pub. 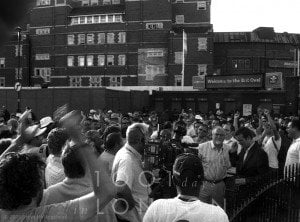 Outside, joyous fans poured into the streets, giving former England legend Mike Gatting (yes, he of that delivery and that umpire) a challenging time attempting his live broadcast analysis.

And seeing as it marked Freddie Flintoff’s final flourish in an England shirt, we ought to flag up this tune.