So here we have a celebration of creativity on four levels: an artist working on a considered study of an ancient Roman sculpture in a recently opened newly designed courtyard as part of a building housing an extraordinary collection of artifacts. And then I took a photograph, so that makes it five levels, I suppose.

Everyone now takes for granted the broad open area with the lattice roof that is the Great Court at the British Museum, but the glorious light space as it is now only opened to the public in 2000, after most of the books associated with the world famous Reading Room were relocated to the new British Library, and the area, which had originally been conceived as a garden, was re-imagined by Foster and Partners. 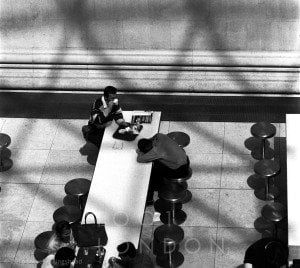 The new courtyard instantly provided useful space for special events and the obligatory café and shop, as well as opportunities for the occasional environmental protest, or two. The museum itself featured in a video by the popular beat combo Bastille, and, more recently, in the 2015 Christmas edition of the wonderful Detectorists (with its equally wonderful theme tune).