No, this isn’t Andy Serkis being so late for his friend’s wedding that he hasn’t had time to get out of character before getting on his Morning Suit (he would have sent a CGI version of himself, anyway), this is what happens when participants decide merely wearing a gorilla suit for a gorilla run is no longer enough, and the additional customisation of said suit is de rigueur these days. [Are gorillas and apes the same thing? Well, not quite…] 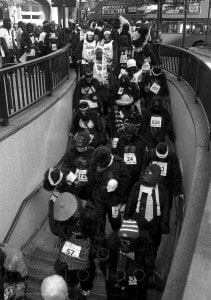 So this is the highly popular Great Gorilla Run, raising funds and awareness of the plight of the threatened Mountain Gorilla (more people take part in the run each year than there are gorillas left in the wild). Starting in Minster Court in the city – where we came across the slightly less popular Nun’s Run previously (nuns presumably not being quite as rare as gorillas) – and it’s early enough on a misty Saturday morning for the 1,000 or so runners taking part not to disturb too many tourists. Or to get too ridiculously hot – as running around in these suits is a pretty warm experience (which is why the real ones tend not to do to much running). 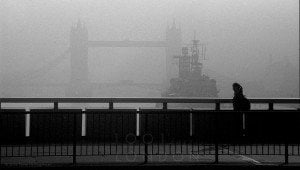 Get there early enough and you may spot the equally rare but no less cuddly Bill Oddie. I suppose I might as well link to this while we’re on the subject. And this, of course.