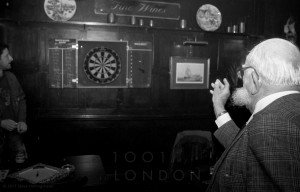 These stout fellows may not look like elite athletes to you, but what we’re witnessing here is intense preparatory work for the tough mental and physical demands of the challenge that is the Handlebar Moustache Club Vs The Pipe Club of London annual darts match [after all darts is now practically an Olympic Sport]. Yes, darts is a much respected pastime these days – and even some of The Chap hierarchy are in evidence this evening. 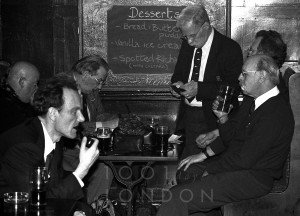 As is evident in the accompanying images, this particular contest is taking place in those halcyon days before smoking was banned in pubs [and despite not being a smoker, I still managed to stink the bus out on the way home], thus there is a splendid display of assorted pipes on the table, which, as they are on a table next to the sandwiches, are fortunately not mistaken for pipe-shaped confectionary. Anyway, as the menu board informs us, there is ‘Spotted Richard’ for dessert. 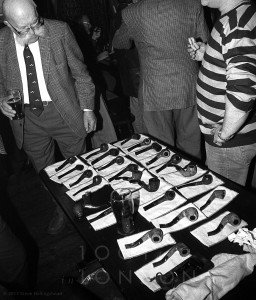 And in contrast to the grim fate that has befallen the Handlebars’ regular drinking hole in Marylebone, the much admired historic Ship Tavern here in Holborn has not [yet] been earmarked for demolition and ‘luxury’ apartments. 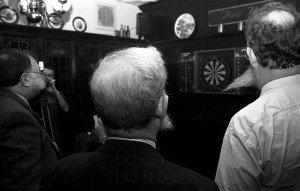 Incidentally, the pub claims to have been a local for a number of celebrated characters over the centuries, one of whom, John Smeaton, is famed for his innovative work on one of the UK’s most important lighthouses, thus we have an excuse to link to this.