I suppose what appeals to me about this composition [yes, actually talking about the composition for a change] is the heroic angular stance of the photographer, who was (presumably) passing by, along with the detached curiosity of the kid in the middle [& no, I wasn’t trying to be clever with the potentially ironic appropriateness of the brand name on his top. However, now you mention it…] who, one guesses, isn’t part of the group either. 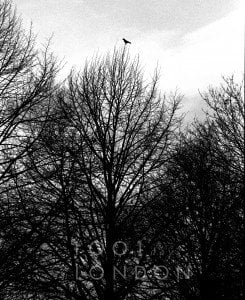 Anyway, it took priority over the one bird in the tree photo, which is just as well, as, I can’t really think of much to say about that. 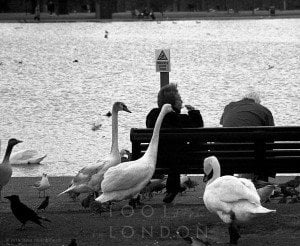 So… we’re in the most westerly part of what is generally considered central London’s Green Lung, and, all things considered, the poshest bit. 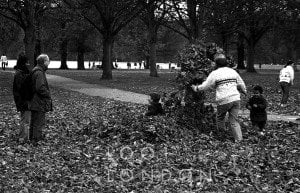 Kensington Gardens (so posh in fact, it can’t bring itself to be called a ‘park’) which provides lovely views from the palace of the same name, has, mainly due to to royal tinkering over the centuries, managed to detach itself from the more down-market Hyde Park despite there being no obvious distinction between the two (well, apart from a road, I know…), and is generally a somewhat more formal and respectable environment – except during the war, of course. 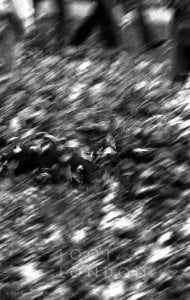 Which is why the anarchy of Autumn and all those uncontrollable leaves that manage to bring out the child in even the most reserved of adults, makes good cause for a distracting detour this time of year. As well as a classic romantic song – in both French and English…