Lord of the Rings premiere 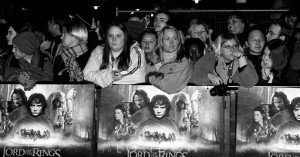 Let’s not dwell too much here on what drives normally sane individuals to stand for hours, often in quite intemperate conditions, for the pleasure of watching people going to see a film. Yes, they’re there to spot the occasional celeb [look – I got a picture of Bob Geldof!] and soak up the thrill and glamour of it all, but it seems awful lot of hard work and sacrifice for generally quite minor reward (especially if you’re right down the front with your giant dedicated hand crafted tribute that you’ve spent months working on and your hero/heroine passes you by and instead signs the crumpled poster some loudmouthed spotty geek is waving on the opposite side of the red carpet… Bastard). 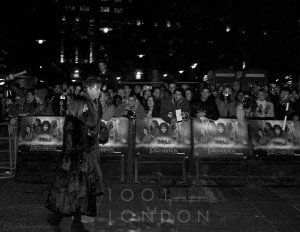 Anyway, what’s interesting about this premiere at the Odeon Leicester Square (of course) is that, at this stage of what ends up becoming a giant behemoth of a movie project, not an awful lot of the actors in the film are currently what you’d call ‘A-list’, so the turn out isn’t quite as huge as you might expect. Hence, I managed to get quite a decent view without having to dress as an Elf, or whatever. Just wait ‘til the sixth film hits town, though… 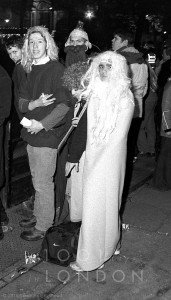 That isn’t to say the film hasn’t been hotly anticipated, and, as we’re all no doubt fully aware, it didn’t do too badly, either critically or at the box office (especially compared to this version), which must have been of great comfort to the estate of Mr T, who may have had their qualms about the emphasis on over the top grandiose battle scenes.

So, after the showing, the celebs and the creatives move on to a much deserved party, secret camera footage here.