July 2003 saw us spending a fair amount of time in St James’s Park, mostly on account of a commission (rare, I know…) from a certain well-known glass company which at the time had a rather smart head office nearby and wanted some snaps of the locality to brighten up their reception area. 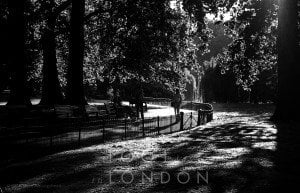 London’s actually pretty spoilt for the quantity and quality of its green spaces, especially the Royal Parks (though you never see any of that particular extended family doing their bit with a hoe or a lawnmower) and St James’s (not to be confused with this St James’, of course) is one of the nicest.

St James’s shouldn’t be entirely written off as a place for tourists – who’ve apparently never seen squirrels or geese before – taking selfies on the bridge as they take in the ‘Must do’s’ of Big Ben and Her Maj’s city hangout. After all, there’re the famous pelicans, lots of ducks and lots of lovely flowers (well, this time of year there are). There’s even a bandstand during the summer for you wild music lovers. 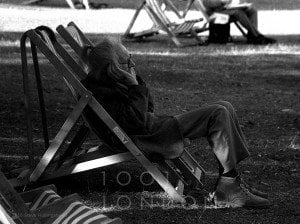 And, as we can see, it’s a place for quiet contemplation and reflection in the company of a much trusted loved one, two-legged or four (and whether the view from the front will be anything like these is anybody’s guess), which can only mean a link to this song, although I personally prefer a bit of Marvin.