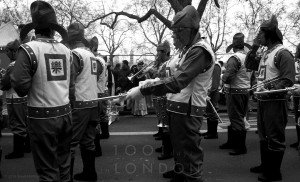 It’s easy to be a bit cynical about London’s New Year’s Day parade – especially when it’s bloody cold, you’ve only had a few hours’ sleep and you’re yet again ruefully reflecting on the consequences of mixing beer and cheap fizzy wine. Still, those fireworks looked quite good from the end of the street.

Yes, there is a very high proportion of American marching bands [the US TV audience now so important that the parade route was reversed the year after this, in order to present better views of ‘traditional’ London] and the cash-strapped London Boroughs don’t appear to be enormously enthusiastic about pushing the boat out – so to speak – for their contributions, although Merton regularly seem well up for the challenge. 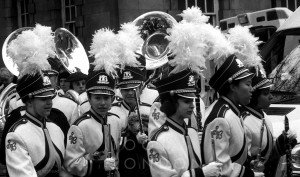 And let’s not forget, most of these hangover challenging over exuberant bouncy young Americans have probably never been out of their home State before, let alone been to London [‘We love your city, but you call that a burger?’]. 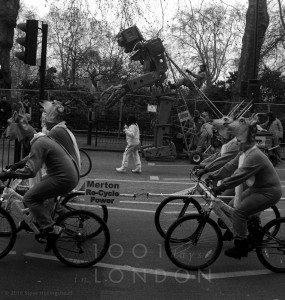 Anyway, not all of these ultra smart marching bands are from the USA: our main picture, for example, presents the European Divine Land Marching Band getting ready to strut their stuff – this is the [comparatively recently formed yet rapidly expanding] spiritual organisation Falun Gong, followers of which are constantly suffering serious grief in China – so presumably the parade isn’t being broadcast live in Beijing, then – and they even have Ode to Joy as part of their repertoire. 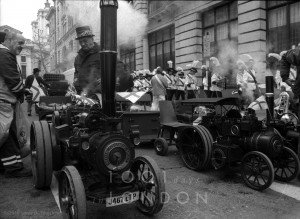 This seasonal ditty, however, isn’t, as far as I recall.