Well this is all a bit baffling: why on earth would one of the top art galleries in the world give over its precious riverside green space for a high profile stunt bike competition (equally incongruously sponsored by a car company) on a bank holiday weekend – entertaining as it was – when it’s trying to promote its own major interactive art event inside the building? 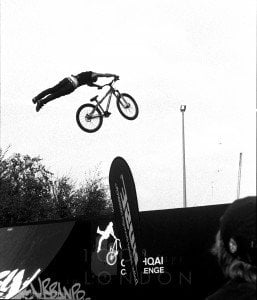 Yes, you could argue it’s a cunning way of initiating young urban types into the mysterious world of modern art, but I imagine most of these spectators appreciated the toilets and possibly the café and not a lot else. The event also manage to render the green space unusable for most of that summer. 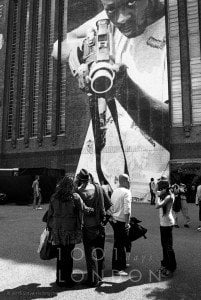 Okay, said car company did sponsor the giant ‘Street Art’ images that adorned the front of the building for a few weeks, so that’s alright then [although if you ask me ‘real’ street art generally looks better in, er, the street]. 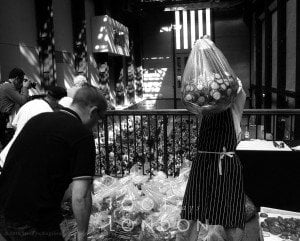 Had any of these flying bike fans ventured inside they could have helped themselves to a free meal, courtesy of avant-garde artist Alison Knowles, part of the Fluxus movement, whose gigantic (and very tasty) salad creation was a central part of this years USB Openings: The Long Weekend series of events.

Called the Fluxus Olympiad, participants were encouraged to take part in a number of surreal sporting activities, sadly none of which have impressed the IOC enough to consider for future Games. 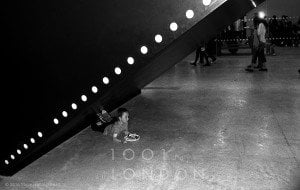 And in the evening Nan Goldin’s The Ballad of Sexual Dependency was presented with live accompaniment from Patrick Wolf, part of which sounded like this.