If there’s any event in London that’d impossible to represent in a single image it’s going to be this one. Fortunately I get to have a few stabs at it over the course of this project, although, I leave it to somewhat younger and more energetic chroniclers to get the killer shot from the heart of the Good Times Stage and good luck to them. 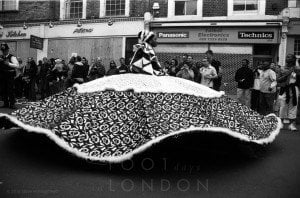 The problem with the Notting Hill Carnival, is, unless you have an established base camp within the boundaries of the party zone (or have limitless energy and bladder capacity, both of which are distant memories for this particular reveller), it can easily turn into something of an ordeal, especially if you find yourself fighting your way through another bottleneck of sweaty ravers knowing you’re at least an hour away from the nearest public transport. 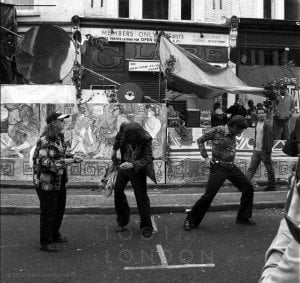 However, even for the fainthearted, there’s still plenty of fun to be had by not straying too far from your entry point. The corner of Westbourne Park Road and Chepstow Road is a comparatively quiet area to catch the parade and you’re not far from Gaz’s patch (not that everybody loves it, apparently), where you’re likely to come across Elvis & his gang giving their all. 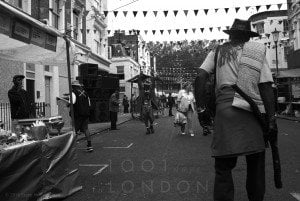 Even the All Saints Road is manageable if you get there early enough… though maybe not quite this early.

Anyway, here’s how it all sounded back in 1966 and, slightly more recognisably, in 1973. 2002, meanwhile, saw the memorable first appearance of Paraiso Samba school.