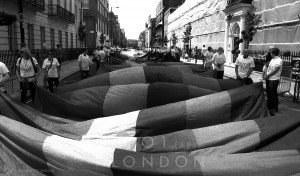 It’s possible this somewhat forlorn looking bride is gazing into the distance earnestly searching for some particularly tardy suitor [and even if one suddenly magically materialised, they’d still have quite a wait on their hands before they could tie the knot – almost another three years, in fact]… it’s more likely (s)he’s looking to see if there’s any movement farther down the street, seeing a the parade ought to be well under way by now. 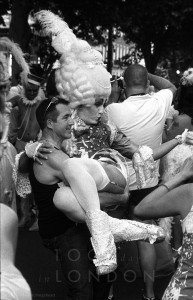 For here we are, quite a way down Portland Place getting ready for Pride and there are many organisations, performers and individuals ahead still waiting to get going, on what is the 40th, & probably biggest Pride Parade yet (& we’ve only covered a couple of them so far). 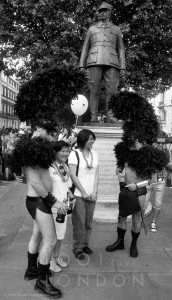 Anyway, the mood is gauche, garish and celebratory – not least around the statue of Polish war hero General Sikorski here, who doesn’t seem to quite know what to make of it all.

The growing enthusiasm for the event is reflected in how deep the crowds are for the length Oxford and Regent Streets, whilst the party has already begun in Trafalgar Square – although within the streets of Soho, it’s still comparatively quiet. That doesn’t last long. 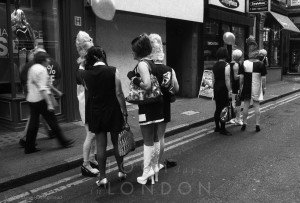 And then, of course it all carries on in dozens of after parties. Those lucky enough to find themselves at Heaven even get to have a bit of a song-along with some up & coming young pop starlet.