Forty years after it was opened by the Queen, the Hayward Gallery celebrated by presenting one of its most ambitious exhibitions to date. Psycho Buildings (no not that one) gave ten artists the opportunity to create ‘habitat-like structures and architectural environments’ within and around the quirkily brutalist building. It was hugely popular: among the installations was Rachael Whiteread’s Village of dolls houses, the rooftop boating lake by Austrian collective Gelatin and Tomas Saraceno’s giant plastic bubble Observatory, Air-port-city, where it was pot luck as to whether you got chosen to bounce around on the top whilst everyone else sat underneath looking up enviously. Like us.

Following the successful re-vamp of the Royal Festival Hall in 2007, it was fairly evident that sister-venues the Hayward and QEH (as well as the ‘dead’ space all around) needed a bit more sparkle as well. Ambitious plans were drawn up which would have meant sacrificing the skateboard area in the undercroft to provide franchising opportunities to help finance the project. Unfortunately for the architects and the South Bank Centre, Urban enthusiast and champion skate boarder Boris Johnson put the mockers on that (if only they’d considered putting a bridge in there, maybe with a garden on it…). So it went back to the drawing board, and now all we’re likely to get is an ‘enhancement’ of the original design (so no glass pavilion in the sky).

Anyway, back in our plastic bubble, Lettie appears to be singing to us… 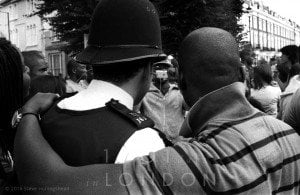 Some sort of Carnival was going on over in West London. I suspect there might be other opportunities to focus on that little gathering at a later date.