I suppose this is, to the street photographer, what the sudden appearance of a Western Purple Swamphen on the Suffolk coast is to an ornithologist: the rare sighting of a parade of umbrellas in the immediate vicinity of a roadworks sign – oh, be still my beating heart… Of course, it could all be a set-up, though nobody else (well, almost nobody else) appears to be making the most of the opportunity – and there are definitely roadworks all along Whitehall (which actually restrict getting a decent across-the-road shot). As you may be aware, I’ve a bit of a penchant for the serendipitous alignment shot, and you don’t get these very often. 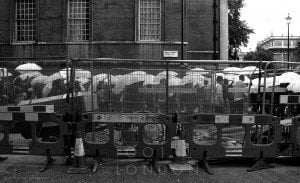 And it’s not even raining – these good people are gathering with their brolleys to mark World Refugee Day (umbrellas signifying ‘care and shelter’ in case you were wondering) – and this before the Syria crisis really kicks off – with a procession from the Ministry of Defence to the Imperial War Museum on the other side of the river. 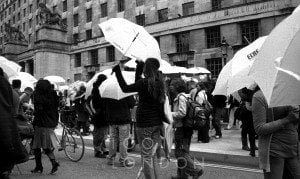 I don’t imagine too many of the thousands of Hare Krishna devotees pulling their glorious chariots nearby through Piccadilly towards Trafalgar Square as part of their annual Rathayatra celebration began their lives here as refugees – although there’d certainly be some – but there’s occasionally a parasol or two being used on the chariots to afford the deities a bit of shelter. 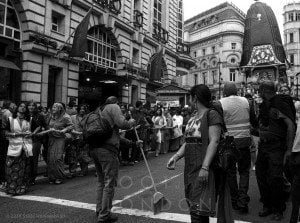 And so, in honour of umbrellas everywhere…