It says a lot about us Londoners that, wherever you may come from, if you’re prepared to make a go of things in this big city, then we’ll soon welcome you as part of the community. Yes, as with most migrant groups, the ‘invasion’ of Cybermen was initially greeted with some hostility by the locals. However, once things settled down and we all discovered what Top Guys they really were, they soon blended in and now form a vital element in London’s pest control industry. Anyway, these fellows crossing the Golden Jubilee Bridge [which is still the Hungerford Bridge to those of us not entranced by everything Royal] are, along with a good number of their once-considered-outcast friends – and their Doctors – heading for a bit od a bash down at the BFI where there’s another one of those Science Fiction Film Festivals taking place, which is naturally a popular theme amongst the Cybermen and their pals. Earlier on they’d all gathered in the courtyard at Somerset House for a bit of a reunion and team photo opportunity, though Batman appears somewhat disappointed that the square’s celebrated fountains haven’t been turned on for them. 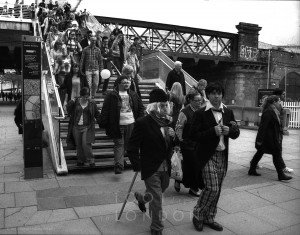