For the uninitiated, the area around Stratford can be somewhat baffling. Having negotiated the complex public transport hub, the prevailing forces in the ether constantly encourage the weary traveller to automatically head towards some sort of shopping experience. Head away from Legacy Land, however, & you find yourself in Stratford Proper.

Not the most glamorous of manors, admittedly, it does however possess a compact and classy cultural quarter. In tight proximity just East of the new shopping paradise/hell you’ll find the historic Theatre Royal, the Cinematic Picturehouse & the community hub Stratford Circus; and it’s between these venues that enthusiasts have gathered today for the annual Sci-Fi Film Festival parade. 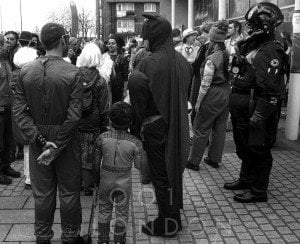 Despite the breadth of creativity in the world of Science Fiction film and TV writing, attendees of these gatherings still seem highly dependent on Dr Who for their inspiration. At this event we had all manifestations of the Doctor (apart from Malcolm Tucker) and a good sprinkling of villains.

If you’re not a follower, proffering ‘a word in your shell-like’ (sorry, couldn’t resist) of a Cyberman is one of ‘The Silence’… who I’ve immediately forgotten (it’s what they do, you see) – though I’m like that with most people generally anyway.

And no, we’re not getting Dr Who music, we’re getting this classic instead.