St George’s Day has always been a bit of a hot potato for the suits at City Hall. Seen by a vociferous minority as the day Proud Englishmen drape themselves in the national flag, drink loads of traditional English lager, shout abuse at foreigners & end the night face down in a curry. Such customary expression of national pride has a good number of people – tiresome Lefties especially – taking issue, for some inexplicable reason.

Obviously, some sort of celebration was called for, especially as it hadn’t gone unnoticed that Mayor Livingstone had already been splashing hardworking taxpayers cash on festivals for the Irish & the Russian communities.

So what was there about Englishness we could celebrate without upsetting too many of its citizens? Well, we all apparently have a fantastic sense of humour. And it just so happens that Spamalot’s on in the West End. So why not have a screening of Monty Python and the Holy Grail, try to break the Guinness World Record at ‘coconut clip-clopping’ (yes, there actually was a previous record ­– and it wasn’t ‘two’) and have a giant Monty Python foot floating above the square.

Now I’m not sure said foot was actually floating directly above Marc Quinn’s sculpture of Alison Lapper on the Fourth Plinth and was poised to flatten it with a spectacularly loud raspberry/fart sound at the end of proceedings, but it certainly looked that way from where I was standing. 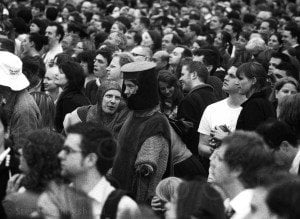