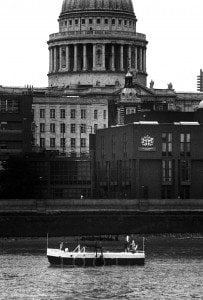 It’s probably just as well that the day sculptor Andrew Baldwin has chosen to introduce his ‘walking boat’ to the world is a cold and overcast October morning, as the bleak conditions inevitably results in a smaller audience than he might have expected, so the resulting failure of his boat to ‘walk’ (due to the unexpectedly steep angle of the beach at Bankside) isn’t quite the humiliation it could have been. 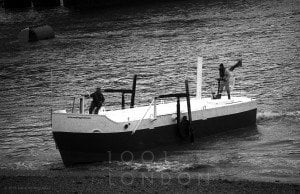 So… what to do now, then? I know – go and check out the latest Unilver Series Turbine Hall installation in Tate Modern: Ai Weiwei’s floor of 100 million hand painted porcelain ‘Sunflower Seeds’. 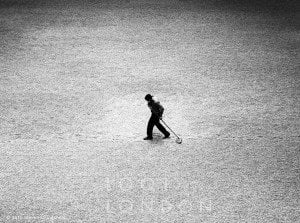 Except… only a couple of days after the much-enthused-about launch of the installation, the public have been banned from walking on it because of the apparently toxic dusk kicked up by all the activity [yes, Mr Littlejohn, ‘elf and safety’], so all we have is this one poor chap in a mask with a broom finding himself transformed into an unscheduled performance act.

All ends happily, though: the Tate ends up buying back a big chunk of the seeds, and seven months later the walking boat returns to successfully march onto the foreshore (and fortunately the indefatigable SE1 website team were there to witness it). 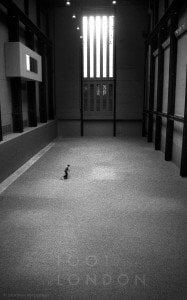 Meanwhile, amongst other distractions, Ai Weiwei has managed to collaborate with another former Turbine Hall installee Ólafur Elíasson to create this little wonder. However, we might draw a veil over this, though, despite its noble intentions.