Thai food is evidently very popular in London – the first Thai restaurant opened as long ago as the mid-sixties (though sadly it’s no longer with us – possibly due to the current buy-to-leave enthusiasm that’s turning parts of Kensington into a ghost town) – half the pubs in London now seem to sell it – even that most British of institutions Churchill’s. So it’s a little odd this well established Food Festival hasn’t happened here for the past few years (though it seems to be everywhere else…) 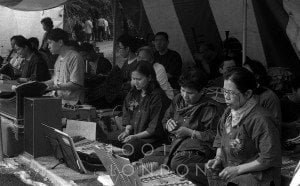 Yes, this is a food festival, which, it has to be said, isn’t exactly apparent in the choice of images selected here. In my defence, black and white doesn’t really do justice to a big steaming tureen of cabbage vegetable pad Thai. Or any of the other 30-odd stalls providing tasty street food for the masses, for that matter. 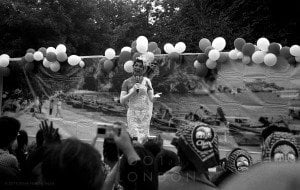 Anyway, there’s still plenty of other cultural activities on offer to keep you distracted whilst you munch: traditional music and dance performances (some of it more slickly performed than others), a main stage with martial arts performances, musicians and (very popular, it seems) drag acts as well as a good number of arts and crafts stalls. And plenty of Singha beer, which can’t be a bad thing. 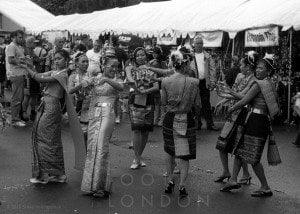 And don’t think I’m going to do the obvious & put a link to Yul Brynner. Rex is so much more, er… convincing. And as the Paradise Bangkok Molam International Band rolls off the tongue so easily, it deserves a bit of a plug…