Walk along the riverside from the South Bank to Bankside and the ubiquity of street performers these days can be overwhelming. The patch by Jubilee Gardens is particularly popular with human statues, bubble ‘artists’, hyperactive Ghanaian acrobats and belting balladeers. Oh, and some geezer called Nile. Up near Tate Modern it’s slightly less crowded (except when Passenger or Bo Bruce decide to treat passers-by to some ‘spontaneous’ busking).

Until a few years ago this was where you might have come across a characterful bearded chap singing to a bunch of small colourful birds and getting them to perform a few charming tricks. This was Don Crown – the Budgie Man (no, not that Budgie man): performer, musician… and sign painter. 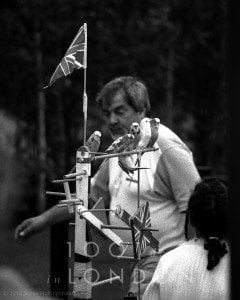 A true stalwart of the old school of street entertainment, a much younger version of him can be seen with his feathered friends in the much overlooked 1973 Peter Sellars film The Optimists of Nine Elms. Failing health finally forced him to give up the street work, but is, according to his website, still active musically. Here’s a short documentary about the chap. And here’s a song from Jesse.