Southwark Bridge, it seems, is one of Central London’s least glamorous river crossings – excluding railways, obviously – there aren’t any songs about it (well I haven’t found one yet), it doesn’t take you anywhere particularly important and no American has tried to buy it. Yet. It’s also one of the least busy crossings – not least because, apart from bikes, all vehicles heading north abruptly find themselves turning east or west as soon as they reach the northern side. So it causes minimal inconvenience when it’s closed for filming or food festivals.

Which is why it’s a good vantage point to be able to catch the Great River Race (this was in the days when the Millennium Bridge didn’t allow any actual people onto it) – the chances of being mown down whilst rushing from one side to the other being slightly slimmer. Hence I managed to catch these heroic Vikings both coming and going, so to speak. Oh, and it has some dinky concrete portholes, giving the river a sort-of circular framing. 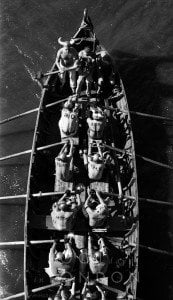 The race itself is quite gruelling (here’s the full journey, if you’ve got the time), crews having to battle from Greenwich to Ham – that’s beyond Richmond for you townies out there – in any floating vessel so long as it’s hand propelled & carrying one passenger. Fancy dress is not obligatory, but surprisingly popular nevertheless. There’ll be more about the race on another day. Now let’s get back to Vikings…