The writing was already on the wall (sorry… couldn’t help it) for the London Dungeon when this picture was taken during the Summer of 2012 sometime between the end of the London Olympics and the start of the Paralympics.

London Bridge Station had been long overdue a major overhaul for years, and the redevelopment plans would result in this whole section of Tooley Street being demolished to make way for a new entrance and concourse – presumably for the benefit of the masses of workers and visitors to the More London complex opposite. 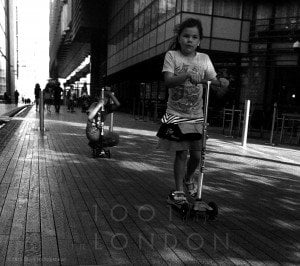 The Dungeon, which first appeared as a basic museum of horror in 1974 had become massively (and, many would argue, bafflingly) popular with tourists after it evolved into an ‘interactive experience’ around the turn of the century, so much so that it wasn’t long before another horror museum conveniently appeared over the road to take up the overflow. Just a coincidence? Oh, absolutely. Ironically, since the original London Dungeon has had to relocate to a new home in County Hall, the London Bridge Experience benefits from all those tourists with out of date guide books. 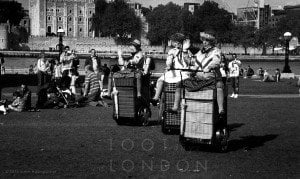 My reason for passing that day was to pay a visit to the ‘Picture: Potters Fields’ big screen site with an update of my projections film, coming across some eccentric old ladies on shopping trolleys entertaining the audience there (though not quite as ‘mad‘ as these people).

Oh, and the animal costumed women in the picture? No idea whatsoever.

Anyway, here’s a sweet little ditty from The Misfits in honour of the nasty old museum.