Yes, we’ve all heard of The Decisive Moment, even the Indecisive Moment, but nobody ever talks about the Cock-up Moment: that point when, after meticulously planning something, finding a reasonable vantage point and then, after managing to find a gap between the multitude of other raised cameras, phones and umbrellas, you manage to press the shutter a second too early [I was tempted to say ‘premature snapulation’ but that really is embarrassingly naff]. They do move quite quickly, these cyclists… 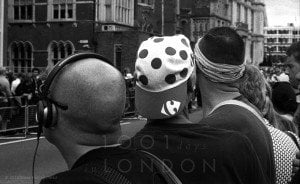 So here we are at Stage 3 of the 2014 Tour de France and, as with pretty much all the route through the city to the finish in the Mall, the streets are rammed with people waiting for ages in the drizzle to catch half a minute’s worth of action featuring people they mostly don’t recognise. And in the absence of Mark Cavendish through injury, Marcel Kittel crossed the line first, but I’m sure you didn’t need telling that. 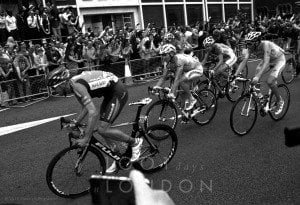 Interestingly, and despite the massive popularity of cycling in the city, the famously pro-cycling ex-Mayor of London decided his successor was not about to enjoy having The Tour in London in 2017 because it wouldn’t be ‘value for money’ (not like the Garden Bridge, eh Boris?), which is a pity as it’d be fun seeing some of the world’s top athletes battling for supremacy along the East-West Cycle Superhighway recently opened (and very popular with joggers, apparently).