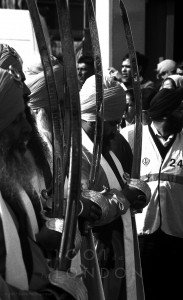 From what I can gather London’s Sikhs appear to have adopted a pretty accommodating interpretation of calendar schedules when it comes down to celebrating their annual harvest festival (well, in the Punjab it is anyway) and the start of their new year, Vaisakhi. Because the Sikh community isn’t concentrated in one or two specific districts, the street procession – Nagar Kirtan – is held in each of London’s Sikh strongholds on successive weekends [so expect to see similar looking images in this project from events taking place in Hounslow, East Ham, Woolwich and Slough… and, you won’t be surprised to discover, Trafalgar Square]. 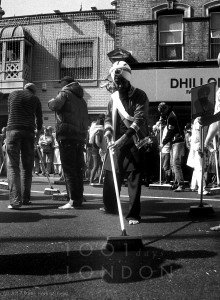 Southall, however, is the Big One, which, presumably because it’s not on the tube and in a comparatively obscure part of town, most other Londoners have no experience of. However, for a few hours each year it would appear about half the Sikhs in the country have made their way here, either to take part in the procession, to provide food and drink (of which there is lots) or to spectate. 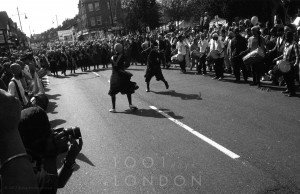 The impressive drum you see in the image here is the Ranjit Nagara – ‘the Drum of Victory’, which is synonymous with all Vaisakhi processions, along with symbolic sweeping the street ahead of the holy chariot, martial arts demonstrations (Gatka) and celebrations of Sikh heroes and martyrs. And turbans, obviously, but nothing quite in this league. 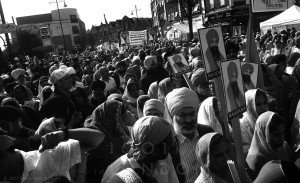 And if you want to see a master dhol drummer at work, here’s Arran Panesar.