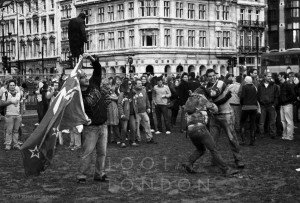 When, back in February 1840, the Treaty of Waitangi was signed, giving Britain sovereignty over New Zealand in return for guaranteeing certain Maori rights, it probably never occurred to any of the signees that the event would be commemorated 169 years later with a muddy wrestling bout in the square directly in front of the home of British Government. 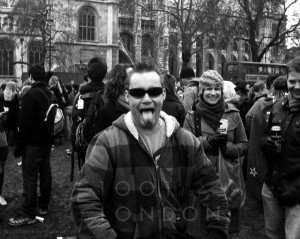 To be honest, this is a fairly unique approach to commemorating an important event, but seeing as nationals from this country are renowned for energetically throwing themselves around in a muddy field, usually in pursuit of an oval shaped ball, then nobody should be that surprised. 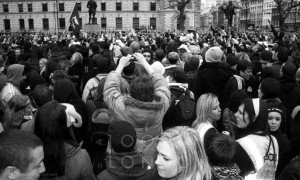 That’s not the actual reason why thousands of New Zealanders are gathered here this afternoon, of course: this is the culmination of a very serious and sombre day of activities involving the ritual consumption of large amounts of alcohol at various points on a symbolic circle before coming together en masse at the home of Parliament for a grand ceremonial howling (witnessed only by the lucky few – and the very tall…) before heading off for more essential drinking nearby. All done wearing appropriate ceremonial costumes, naturally. 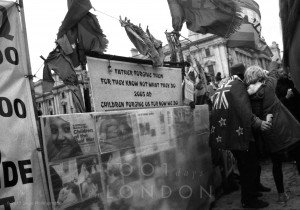 And no doubt the peace protesters and hunger strikers on the edge of the square were as full of enthusiasm for the occassion as all the participants.

Some observers might argue that that’s not a real Haka – this is a Haka (and this is a proper mud fight). And this, presumably, is what everyone is getting up to at the after party…