Knitting has come along way in recent years. No longer is it just the preserve of elderly grandparents presenting you with something charmingly hideous to be worn on Boxing Day and then never again. Despite the activity having a long and important history, the era of mechanisation had more or less relegated the art to something of a gentle pastime for daytime TV-watching retirees.

Not any more, though. Along with other ‘forgotten’ crafts, it’s had quite a revival since the new millennium, initially inspired by the 2003 publication of Debbie Stoller’s ‘Stitch & Bitch: the knitters handbook’, hundreds of knitting groups sprung up globally, encouraging knitters of all ages (and genders) to get their needles out and create, with the inevitable offshoot of the Guerilla Knitter following not far behind. 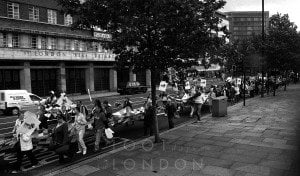 Knit A River was an idea conceived by the knitting club I Knit London as a way of drawing attention to the plight of the 1.1 billion people in the world without access to safe water. The concept was simple: get anyone and everyone who enjoys knitting to produce a 15 x15cm blue woolen square and send it to I Knit London, where they were all assembled to form a huge ‘river’ which would be used for various public awareness opportunities for Wateraid. 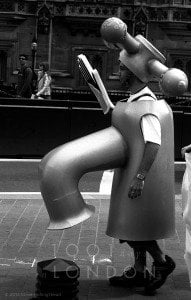 By the time this ‘petition’ was wending its way from Lambeth to Parliament in Spring 2007 to coincide with the G8 conference it had garnered over 100,000 squares contributed by knitters from all over the world. 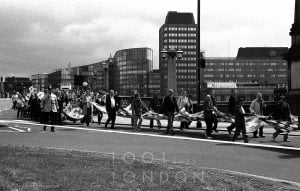 Meanwhile, here’s a charming animation about an obsessive knitter, here’s an earlier example of knitting for a good cause and here’s a fantastic piece of country music.