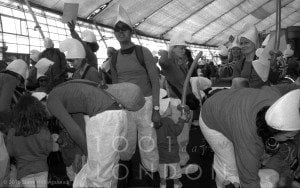 There’s obviously never a dull moment at the O2 these days: inside in the public area there are thousands of people, young and old, painted a pale blue colour & sporting Phrygian caps, dancing around to Pontins Bluecoats and attempting to break a world record Smurf gathering.

At the same time, thousands of chirpy enthusiasts (‘Gleeks’, apparently) are arriving for a Glee Live! concert in the main arena.

Meanwhile in stark contrast, immediately outside the arena by a makeshift shrine, a gathering of hardcore Michael Jackson fans are marking the second anniversary of his (apparent) death by dressing up as their hero and performing some singing and dancing in his honour. Strangely (or not at all strangely, when I think about it) none of the three groups of participants seem remotely fazed by either of the others. 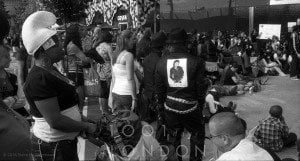 [In case there are people out there with no idea what I’m babbling on about: The Smurfs are a community of Belgian cartoon characters with a hit single and plans to take over the world; Glee was an American TV series about super talented performing high-school misfits, with plans to take over the world (except Birmingham), and Michael Jackson was quite a well known pop singer.]

Now wouldn’t it be amazing if I could find a clip of Glee types dressed as Smurfs belting out Earth Song. Ah well…